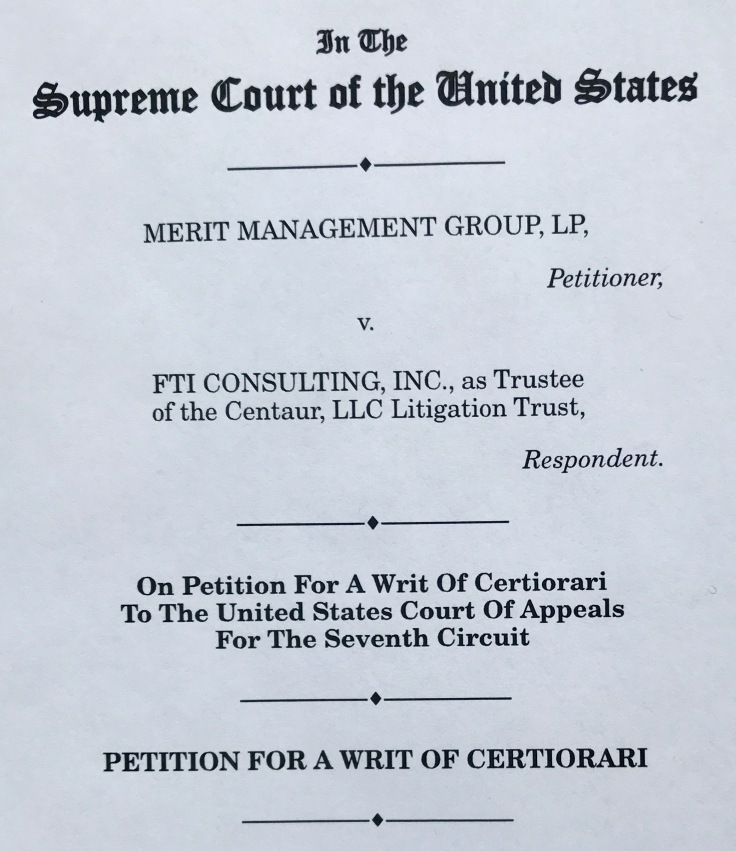 § 546(e) provides protection from fraudulent transfer liability in specialized circumstances: e.g., for sales of corporate stock through an intermediary.

Such a split of authority among circuit courts is one of the reasons for the U.S. Supreme Court to accept an appeal (i.e., to grant a petition for a writ of certiorari): so it can resolve the split.  And two appeals are currently before the Supreme Court on the same § 546(e) issue.

The facts of the case are these:

Valley View Downs and Bedford Downs are competing for a harness-racing license. Rather than fight over one license, Valley View and Bedford agree to combine. So, Valley View pays $55 million (using borrowed money) to purchase all the Bedford shares of stock. The parties use Citizens Bank, as escrow agent, to accomplish the deal.

Thereafter, the bankruptcy estate files a fraudulent transfer suit against Merit Management Group (a 30% Bedford shareholder) to avoid the $16.5 million stock transfer payment (30% of the $55 million) to Merit.

The District Court below rules in favor of Merit under § 546(e). It finds that all elements for protection under § 546(e) exist, including the “made by or to (or for the benefit of) a . . . financial institution” element, because of the escrow agent’s involvement

On May 1, 2017, the U.S. Supreme Court could also have granted certiorari to hear an appeal from the Second Circuit on the same issue, in Deutsche Bank Trust Company Americas v. Robert R. McCormick Foundation, US. Supreme Court Case No. 16-317. But it doesn’t grant certiorari. It still could – but it hasn’t yet.

The facts of the case are these:

A purchaser acquires all shares of stock in the Tribune Company for $8 billion. To fund the purchase and refinance some existing debt, (i) an investor puts in $315 million as equity, and (ii) Tribune borrows over $11 billion, pledging its assets as security. The parties use a securities clearing agency as intermediary for exchanging the purchase money for the stock shares.

A year later, Tribune files Chapter 11 bankruptcy, with debts exceeding asset values by more than $3 billion. So, unsecured creditors of the Tribune Company sue former stockholders to recover the $8 billion they received. The stockholders raise a § 546(e) defense.

The Second Circuit Court of Appeals disagrees on the “standing” argument but sustains the dismissal, anyway, because of § 546(e).

A Common Legal Question in Both Certiorari Petitions

Here is the question presented to the Supreme Court in the first certiorari petition:

Here is the same question presented to the Supreme Court in the second certiorari petition:

Whether the 2nd Circuit correctly held – following the U.S. Courts of Appeals for the 3rd, 6th, and 8th Circuits, but contrary to the U.S. Courts of Appeals for the 7th and 11th Circuits – that a fraudulent transfer is exempt from avoidance under 11 U.S.C. § 546(e) when a financial institution acts as a mere conduit for fraudulently transferred property, or whether instead the safe harbor applies only when the financial institution has its own beneficial interest in the transferred property;

This is a Good Thing

In light of the grant of certiorari in the first case, I hope they don’t grant it in the second case. This would be a good thing.  Here’s why.

The fact context and legal questions in the second case are, on the other hand, more complex and broad. For example:

–There are two additional questions presented. One deals with whether “the presumption against federal pre-emption of state law” applies “in the bankruptcy context.” The other is whether “it is for Congress, and not the courts, to balance the multiple purposes of the Bankruptcy Code, and that courts must therefore rely first and foremost on the text of the code.” These are broad and far-ranging questions that, if answered directly, could have unexpected and unintended consequences in many other contexts.

–Whether the Supreme Court answers, “Yes” or “No,” on either of the two additional questions, we will all be left wondering what the extent and limits and exceptions to that answer might be. It will be like the Supreme Court’s simple “No” answer to a complex question in the recent In re Jevic case, which raises other questions that appear to be unexpected and unintended.

Some have suggested that the new Supreme Court Justice, Neil Gorsuch, is the deciding vote on whether certiorari is granted in the second case above. Hopefully, we are seeing evidence that his vote is, “No.”

**  If you find this article of value, please feel free to share.  If you’d like to discuss, let me know.