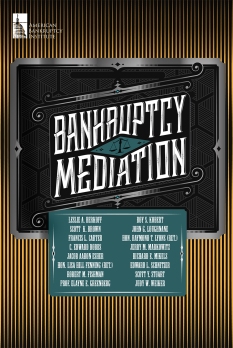 The “early parts” of a case under the reorganization chapters of the Bankruptcy Code (chapters 9, 11, 12 and 13) involve many difficult battles.

Early battles are over such issues as relief from stay, cash collateral and DIP financing. The burden of litigation in such matters “can be tremendous,” and such litigation “rarely has any winners.”

–So says Scott K. Brown, Partner at Lewis Roca Rothgerber Christie, in a chapter of  “Bankruptcy Mediation” a book recently published by the American Bankruptcy Institute.

The appointment of a mediator for the early issues can have great value. Such early-stage value includes the following, according to Brown:

–“A mediator can help the parties set the stage for (and resolve) future issues regarding plan confirmation.”

–“Having a neutral party guide the reorganization or liquidation efforts of a case from the beginning to the end”:

–“achieves the objective of saving clients significant money,”
–“gives continuity to the process,” and
–“lessens the burden of turning to a mediator on the eve of a confirmation hearing, for example, when it may be too late or too unbearable for the parties to reach middle ground.”

–“A mediator is uniquely positioned to resolve disputes with multiple creditors:

–“These [multi-party] issues are often complex and can sap the limited resources of a debtor (and a court) early in a case.”
–“A mediator can act as the hub that holds the many spokes of the various creditors’ interests together in an effort to temper the ‘burn rate’ that vexes the early stages of many bankruptcy cases.”

Brown’s elaboration on such matters in the  “Bankruptcy Mediation” book is a must-read.

The book can be ordered here.

One thought on “Mediation in the Early Stages of a Case: ABI’s “Bankruptcy Mediation” Book”