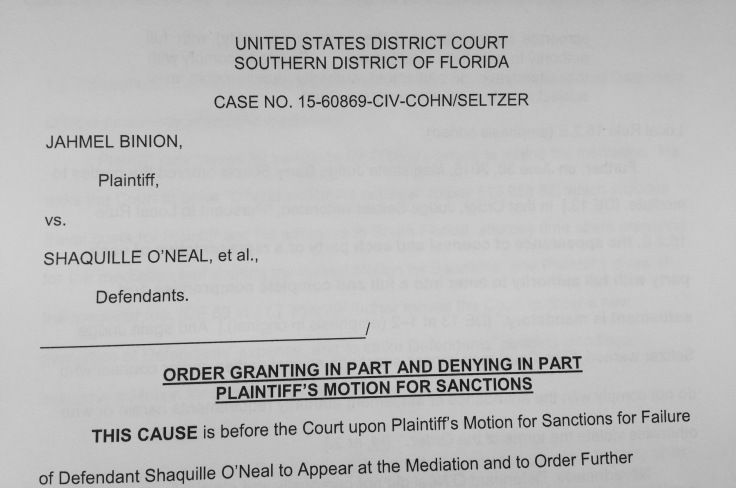 Who would have ever predicted, for example, that someone like Anna Nicole Smith (fka Vickie Lynn Marshall) could cause havoc within the bankruptcy system?

Then there is Willie Nelson and his IRS battles.

Or how about John Fogerty’s long battle with his record label over Creedence songs?

But now we have Shaquille O’Neal entering the legal scene over the requirements of mandatory mediation.

About a year ago (on April 23, 2015) Shaquille O’Neal is sued for defamation in the U.S. District Court for the Southern District of Florida (Case No. 15-60869-CIV).  The Complaint says Mr. O’Neal mocked Plaintiff’s physical “abnormalities” by “publishing on Instagram and Twitter the plaintiff’s picture and a picture of O’Neal attempting to make a similar face.”

The Court explains in an Order (Doc. 98) that it’s Local Rule 16.2 “requires mediation in every civil case” (with few exceptions), that “both the parties and their lawyers must attend,” and that sanctions are authorized for a failure to comply.

Upon advice of his attorneys, Mr. O’Neal does not attend the mediation session in person.  Instead, he participates “sporadically by Skype” and sends “a representative to participate on his behalf.”

Plaintiff then moves for sanctions.

–“Here, sanctions are appropriate.  Both this Court’s Local Rule and Judge Seltzer’s mediation order required O’Neal to personally attend the January 27 mediation.  But O’Neal did not.”

–“The Court will order the parties to mediate this case again, with Defendant O’Neal present.”

–“[T]he Court will order Defense Counsel to pay Plaintiff’s attorneys’ fees and costs for attending the original non-compliant mediation” for a total of $13,058.82.

On March 18, 2016, the Court’s docket shows that the parties settle this case and stipulate to its dismissal with prejudice.

What do you all think about this?

3 thoughts on “Mandatory Mediation: How To Get Sanctioned – the Shaquille O’Neal Lesson”